Subject: HEY BABY, I WROTE YOU A POEM

O! Fair Frank, why has of late your fair correspondence not graced my humble inbox?

Will, perhaps, a sonnet written in your name suit to make the communication that was once abundant between us flow readily once more? Sincerely, I hope that this may be:

O! FRANK THOU ART BUT A STICK;

A STICK OF A ROSE

WHICH IF I PICKED IT UP WOULD HURT ME GREATLY

BUT THAT’S NOT THE POINT (geddit?)

O! IF I WERE A PIGEON I WOULD ENDEAVOUR

TO NOT CRAP UPON YOUR HOUSE

INSTEAD AIMING FOR THAT OF MS AGAR’S

HOPING THAT MY FERTILE POO

WOULD GO ON TO GROW ANOTHER ROSE LIKE YOU

Forthwith I hope that the silence between us will blossom again with the coming of spring into the high brow conversations about matters of great importance which we used to share. And to that note I shall breeze onto the next subject:

My mother and I were In Westcliff earlier today when we happened upon a charity shop which had sprung up for a limited period of two weeks only. And we went in. Because we’re both somewhat partial to charity shops.

Well, against the back wall they had piles of sewing materials, and I went all ‘FLAGLAARGHRAFFFFthereyougotakemypurseitsmine’.

And I bought some fabric.

I don’t think I’m communicating its full monstrosity to you effectively. Here, have a picture to help: 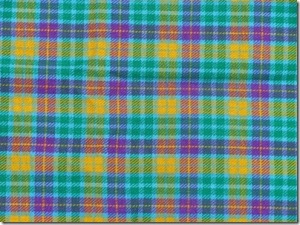 There’s also quite a bit of it. Now, it said on the Post-it note attached to it that it was three and a half yards by 60 inches, but I’m not all that good at old measures and hence somewhat underestimated how big it would be and I’ll assume that you will have too, thus I think another picture is in order:

(and yeah, sorry about their quality. They both looked a lot better before I ran them through Paint. But you know, some times Paint’s all you feel up to)

SO. I now have a shitload of even-the-eighties-would-be-horrified-at-it fabric, and I’m not really sure what to do with it.

And that’s where you come in. Any ideas?

My mum said I should make a blazer and skirt and rock it out with a pair of DMs, but that’s pushing even my sense of fashion a bit too far. She later changed her mind and said she wanted to use it as a table-cloth (RETINA BURN WHILE YOU EAT).

Personally I was thinking along the lines of some kind of bag, but hey.

Well, you heard the girl. I suggested a Killjoy outfit, but I know a few of you do Textiles, so…?

2 thoughts on “HEY BABY I WROTE YOU A POEM; an Email by Ruby.”

You can use the PayPal button below, or the button on my newer posts, for one-off support of as much or as little as you’d like. Thank you!

© Francesca Burke and IndifferentIgnorance.com, 2009-2021. Unauthorized use and/or duplication of this material without express and written permission from this blog’s author and/or owner is strictly prohibited. Excerpts and links may be used, provided that full and clear credit is given to Francesca Burke and IndifferentIgnorance.com with appropriate and specific direction to the original content.

I haven't been updating here much, but I'm still blogging! Recent posts include:
Loved doing May's tarot readings for the No. 1 Readers' Club! I'm not sure if I'll continue doing it in the photograph format, although I did enjoy writing up the little explainers.🧿
If you're in the Southend/Essex area and have thought to yourself 'what is the Kursaal doing now?' YOU HAVE THE CHANCE TO DECIDE. The public consultation for the building's future is open until midnight tonight, and @concreteculturesx needs your input. Find the survey on their page and go go go!
Stuck for reading material? I have 30 stories (maybe? I reckon at least 30) available for all to read at francescaswords.wordpress.com (link in my profile). 🖊
Humans of the general Southend area! Check out @showupsouthend's Maker's Market from today until 30th May. Some of my pieces will be there, alongside other local creators' work. It's at 152 Hamlet Court Rd, 10am-4pm. ⛱
If you read 'The Princess and the Dragon and Other Stories About Unlikely Heroes', please consider leaving it a review or rating on Goodreads. I'm self published so reviews are a *huge* help for my PR! (Unless they're shit reviews, but you do you.) 💙 PS I am still on holiday. Consider this a message from Past Francesca. 👻