Joke overheard while I was getting books out of my locker this lunchtime: “Prince Harry has been reported missing after going to a costume party in Pakistan.”

While we’re on the subject, how stupid/genius have the people at Fox News been lately? First Glenn Beck, now this:

To slightly quote Nick Frost on Twitter, why is Osama’s picture on the news one of him looking like a misunderstood angel? Seriously. They could at least have the Towers falling in the background or something…

Anyway, who’s excited about the referendum? No, me neither. Whatever the voting system in this country, we will still end up with an arsehole in a suit and lots of broken promises, I’m not fussed on how he gets there. If you are interested, however:

In other news, My Chem have been nominated for nine billion Kerrang! awards, I live in Zone 33 and it’s Star Wars Day! May the fourth be with you! This used to come up amongst random pictures of the girls and I when you Google Image ‘Indifferent Ignorance’, I’ve been wanting to use it for ages. 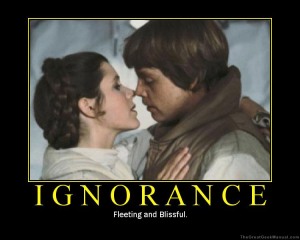 This is a new one, but it seems rather appropriate in the circumstances:

I knew I forgot something! Thank you to Mike Pedicone for putting this on Twitter. The flag gets in the way, what’s God trying to tell you?

4 thoughts on “May the Fourth Be With You, Etc.”