You can’t be in the most dangerous band in the world and make everybody happy.

My Chem Wants Everyone to Kill Themselves

It’s quite tempting to not even link the offending articles that The Daily Mail had the audacity to call journalism – but unlike the rest of the British press, I have sources to support my argument. The Sarah Sands article in 2006 – before Parade came out – that, I believe, started it all. Then there’s the immensely sad story of a thirteen-year-old girl hanging herself that got blown way out of proportion by The Mail and, possibly, The Sun (I ain’t gracing their website with my presence to find the article, sorry). My heart goes out to the girl’s family – but if she believed killing herself was what the band wanted, she’d been exposed to ignorant teenagers, not a motherfucking suicide cult. Or the actual band. Anyway; an ignorant Mail reader’s reaction that I stumbled upon a few years ago and is good to yell at. My Chem’s reaction. The MCRmy’s reaction.

Having heard other cover versions, I can honestly say that Glee‘s cover of SING was far better than it could have been (although I have no idea why they were dressed like Scottish farmers). Glenn Beck had something to say. Then Frank and Ray did on Twitter (scroll down their timelines to find the insults if you want, I have school tomorrow). Then I did too. Then Gerard did what he does best by drawing a cartoon and reminding everyone that the point is to piss people off.

One of the best shows ever. The shows that were better than that.

This is what happens when you Google ‘Why do people hate My Chemical Romance’.

There are actually some valid comments, considering the commenters’ ignorance. To the casual listener – and the rest of us, actually – some songs are overplayed. There is a large emphasis on death in the earlier work – just not in a negative way, an observant one. They did used to wear an awful lot of black, and it isn’t the happiest colour around. The guys didn’t set out to be rockstars, but this doesn’t mean they’re ungrateful, it just means they aren’t in it for the money.

This is my favourite part of an answer:

…and finally they are completely about the look, just think if my chemical romance got a tan, a non emo hair cut, and started wearing a t-shirt and jeans do you think any of their fans would buy one of their cd’s or go see them in concert…

I salute your reasoning and respect your opinion. Your ignorance makes you wrong, and your lack of grammar makes you inarticulate, but I hear you. 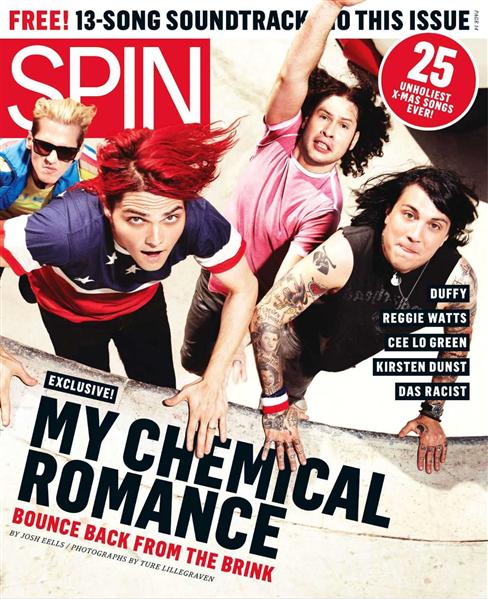