Today was MCM at ExCel, and everyone there was insane. So we fit right in.

I only have pictures from mine and Elizabeth’s phones, so hopefully I can post more when nice people put them on the Interwebz (hint, hint).

I sneaked a photo of one of the Party Poison cosplayers while he was having a fag:

Sticking with the Killjoy theme for a minute: BLI on drugs!!!! 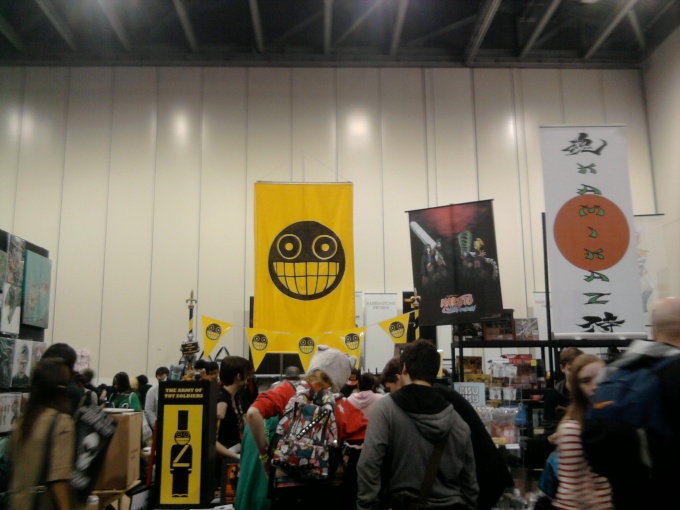 Another Party Poison and her seriously cute doll (I only know her as Lithium Sunshine – I think – but thanks for letting me stick my phone in your face!):

In a nice coincidental twist, Gerard’s dyed his hair black for when the band dressed up as knights for their almost-Halloween show in New Orleans yesterday. I hope he dyes it red again for the next Killjoy video, or those cosplayers are going to be bummed.

We saw at least one Fun Ghoul, about thirty Matt Smith Doctors, maybe ten David Tennant Doctors and a whatshisface-with-a-scarf Doctor. At one point two Matt Smiths and a David Tennant chased each other round the grass, attacking other Doctors as they went. I don’t read manga, but I learnt to recognise various wigged-and-robed characters as we went around various money-swindling stools. A hint to members of the public, however: wearing hotpants, bras and short skirts when they don’t fit or aren’t made for your sex is really scary. Please carry around signs to warn us.

Now for some modern-art pictures by your resident artistes, entitled Lesbians On a Day Out.

I thought about cropping out our crotches, you know, but then I remembered the title and that we are supposed to be an example of modern society. And we saw about twelve thousand innocence-violating outfits today, so I think I should leave it all in. Gritty realism and all that.

And a picture of the artistes, for the portfolio:

You guys can title that last one, I can’t even be bothered to think something up snappy.