I have some video to upload and some more pictures to add to both posts, but my laptop battery’s running low and I have to get up for karate tomorrow. I’ll add stuff over the weekend. Anyway, enjoy!

Installed in our seats, Seb Coe and co. having rallied the crowd, the men’s decathlon high jump is underway.

When we did high jump in year seven, I nearly kicked my teacher in the face. I felt bad so went along to high jump club that lunchtime. I had one go and was told to sit out on a bench.

Robbie Something, bronze high jumper, from yesterday, is interviewed while the long jumpers (?) emerge. The long jump pit looks tiny from up here. A wee sandpit.

There are a couple of volunteers playing with remote control Minis on the grass. It’s a tough gig this volunteer work, isn’t it? Never mind the sweating, uncomfortable spectators sitting right in the sun’s glare with not even a sea breeze for ease. 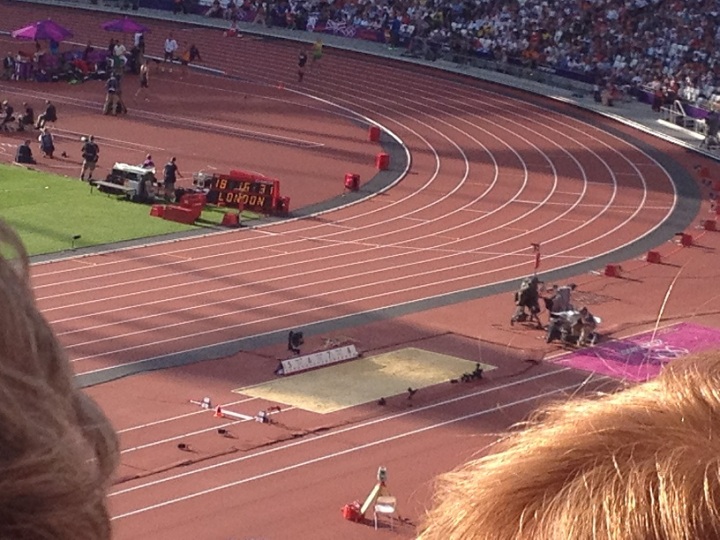 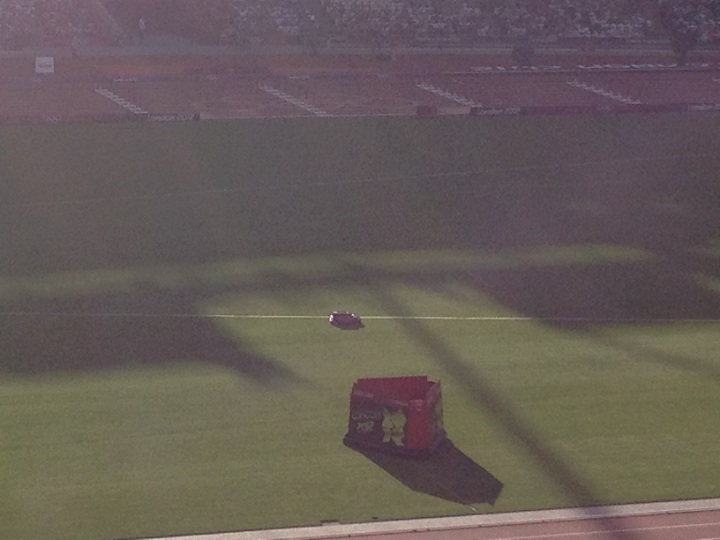 I was wrong, it’s the javelin that’s about to start. I was crap at that too. It’s just advanced spear throwing, isn’t it? I bet it came about because a bunch of Greek men couldn’t settle who was the big hog poacher.

God knows how discus was invented. [Javelin is actually derived from war… Similar.]

Play is paused for the long jump medal ceremony. Three bronzes, including Robbie Watsisface, who we are excited for, then a bloke from Qatar and a Russian with gold. I’ve never stood for the Russian national anthem before.

I’ve never stood for the British one either, come to that.

We are now deep into javelin and high jump decathlon and there was the men’s 110m hurdles qualifiers just now. We came third! Clark got a personal best. My personal best in hurdles was getting over a spongy one in year seven. In one lesson I had to put my hand up saying I couldn’t do it when we were asked who was struggling.

There were year nines in there and all.

More 110m hurdles. The Jamaican guy ran into a hurdle and was going so fast he ran into the next one too. Bless him, I think he hurt himself.

The javelin is interesting… It turns out the Minis are used to cart the javelins back to their owners. What happened to walking? Was that Boris’ idea?

The high jump’s still going. I still dislike it.

Third 110m semi final. No one fell this time. New Jamaican record instead. British guy in the final.

I never thought I’d want the sun to go away, but I’m so hot I’m sitting in a pool of my own sweat. Wear cotton, spectators. You’ll thank me later.

I missed the woman’s 1500m semi-final – the first one; the second’s about to start – because I went to stretch my legs and go to the loo (still no sanitary towel bins. London, sort it). 1500m’s a bitch. Sod sport.

The tracking camera’s interesting. I liked to think it was a little man running alongside the athletes, but it’s on a track. There’s also a maze of wires with cameras. Who needs big brother when you’ve got the BBC? I’m scared to scratch an itch.

Now it’s the woman’s long jump final, and I can actually see these athletes.

What’s the deal with athletes wearing bikinis? Especially in long jump. Sand gets everywhere after five minutes on a sun lounger, let alone jumping in it.

I’m going blind. That was Blake, not Bolt. Bolt just ran and it was like he didn’t even try, like he slowed down a little at the end to make the others feel better. To make national champions feel better.

He really is tall.

The Russian longjumper asked for no rhythmic clapping. The American did. They both jumped pretty far.

Javelin’s still on. No officials have been impaled yet. Not even during practice when they hang out on the pitch.

More 200m. I bet Usain Bolt’s got his feet up with a fag. Can you smoke here? I’ve not seen anyone smoking here today. Did Boris outlaw it?

False start. “Anything below 0.01 reaction time is illegal… obviously anything in negative is very illegal.” Guy in blue got chucked. What if he was just really, really quick?Or if he saw a javelin out of the corner of his eye and thought it was a fellow runner? It’s very distracting, having so much going on at once. The stadium looks huge on television but it’s actually the seats that give it that impression. The track’s just a track.

After another medal ceremony – I do like Chariots of Fire these days – and some more long jump, it’s the women’s 400m hurdles final. I’m quite bummed Jessica Ennis isn’t in it, but I got to watch Usain Bolt run In Real Life, so I’ll quit moaning.

It’s good that so many different countries are getting medals. We stood for the Algerian national anthem earlier – it’s very good – and an Irani got bronze earlier. It’s nice to have a mixture in the tables, instead of it all being led by America and China.

Oh, what an excellent metaphor for current affairs that is.

I recorded the women’s 1200m final because everyone needs to see how excellent the atmosphere is here. The tension before the gun sounds is mad.

The crowd’s pretty funny when something unexpected happens. “The best javelin throw this year” caught everyone’s attention as it went up and the stadium went “Oooh!”

I would like to state for the record that the board athletes jump from during the long jump is stupid. Everyone is either on it too much or not enough. Use a springboard instead. Boing…

We just did a Mexican Wave with nearly 80,000 people… No one even noticed the sport. And Pulp played. Men’s 110m hurdles final now.

There’s been a guy sitting in front of me reading The Telegraph all night. I had a nose over his shoulder and his wife caught me. Another guy picked his nose just now, and Tom Jones played.

I’m not sure if these two events are connected.

There are these speakers by everyone’s seats. I kicked one earlier while I fidgeted. I’m bummed they aren’t mini scoreboards, or 80,000 Tetris boards.

Men’s decathlon 400m. All this exercise is making me hungry.

Just after the men passed the javelin bloke (thrower? Hurler?) stepped over it. It’s like Piccadilly Circus in here… and there’s a couple dancing to Vampire Weekend.

[one man poses the other way]

French man: [looking at the result] This is sheet.

French man: [realising another 400m’s about to start] Ooh. Shh!

They played Queen just now and it’s getting cold.

Having watched Sally and the hurdlers get their medals, we file out of the stadium. There are numerous reminders that Stratford is very busy, so we get bacon sandwiches from a kiosk before leaving the park via Westfield. Remind me to go back and try out the Greek restaurant there. It’s near Prada.

The train for Essex finally arrives and we have our pick of seats again. The only downside to the journey is that the carriages appear to be made from tin cans, and it feels we’re rattling through a thunderstorm. Cool normally, but the bacon sandwiches have screwed with everyone’s stomachs and all we want is to sleep. A girl in a seat in front is reading Arkham Asylum. Grant Morrison and the Joker at midnight… that’s hardcore, man.

I crawl into bed, pass out, have a dream about Tom Daley and wake up the next day with a newfound enthusiasm and respect for sport. How odd.