The YouTube videos won’t load either because iPhone files are enormous, or because the Internet’s being slow, or both. So I’m going to talk some more about the Olympics while they load pathetically.

I’m really bummed out that the Games are over. Not quite ‘sad’ or ‘upset’… I feel kind of… ‘blue’. It’s not a phrase I use much, because I think blue is actually quite a happy colour, but I think it fits. Today I missed watching the morning session in my pyjammas, torn between getting dressed and doing exercise and hanging on while they interview Mo Farrah. We’re watching Jonny English this evening instead of becoming experts on a sport we’ve never heard of and will never take part in. The news was on at six. The actual news, not just Olympics 2012 Continued With a Bit About Syria At the End.

Roxy asked on Twitter if it’s too much to ask UK citizens to keep being polite and friendly, and continue on with the spirit that made the Olympics great. I really, really hope it isn’t; but I’m a realist, not an optimist. The weather in this country is usually shit. So is the government, the council, the traffic, the cost of living, modern music, etc. We find it hard to get out in the sunshine before a) It’s too hot for our wee internal thermostats or b) it rains. So how the hell are we going to continue inspiring a generation without winning a gold medal every Saturday night?

If someone mentions Simon Cowell or a dancing dog, I’m going to ban you from this site.

Seriously, though. Since the Jubilee I’ve had increasing pangs of patriotism. From the Queen nearly crying in June to the opening ceremony to athletes crying their eyes out on the podium to Freddie sharing a stage with the Spice Girls and a giant inflatable octopus… I’ve started saying ‘we’ when I talk about Britain. Me, who pretty much disowned the island when I got fed up with incorrect grammar in official documents and being mistaken for an Asian person by ignorant prats.

I think they missed a few capitals from names in the menus of the fish and champagne restaurant (hail modern standards!) and my grandmother pointed out that a volunteer saying “Goodnight, have a safe trip home,” as we left the park was probably because he thought we were foreign… But nothing’s perfect, and I took it as a testament to my suntan.

I’m off topic. Blame my Queen dancing into the small hours. My point is, the last fortnight has given these tiny grey countries something to be proud of. We don’t have to duck our heads in mild embarrassment when we’re abroad and can only speak to locals via hand gestures and nodding anymore. We can stand up (fucking) tall and remember that this is the nation that not only spawned David Bowie and Voldemort, but also the friendliest, brightest and most dramatic Olympic Games since Ancient Greece. Which is pretty damn excellent.

We just need to remember that.

So I’ve compiled a list of pros and cons of the 2012 Games, as a reminder that we’re pretty cool. I’ll start with the negatives, because there’s less of them. 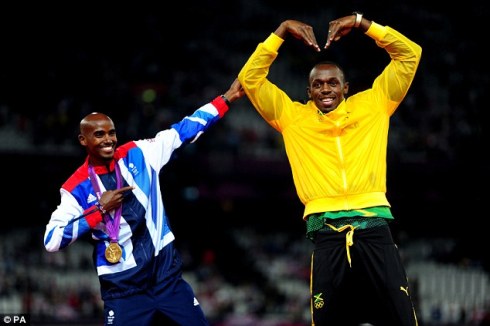 I’m sleep deprived again. When the YouTube videos finally load, I might add some more to this. Like a fancypants final paragraph. Or a picture of me in my trackies doing some exercise, holding up a sign saying ‘IF THE OLYMPICS CAN INSPIRE ME, YOU HAVE NO REASON NOT TO GET OFF YOUR ARSE’.

Oh, God, there’s a thought. I’ll link the Rwandan team at a bus stop, instead.

4 thoughts on “Olympics III: the Blues, Boris Dancing and, Basically, a Review”