This review  is the first that feels a little like cheating because I had actually seen bits of the film on TV, about 10 years ago. All I could remember before starting the novel is that Hugh Grant’s in the film and so’s that guy who went on to be in Skins (I think?). So my memory didn’t spoil it for me and I won’t spoil it for you.

My copy of About a Boy is courtesy of a university I considered attending long enough that they sent me free things. The parcel contained a letter from Nick Hornby advising that every misstep is not, in retrospect, a misstep (coincidentally I have been clinging to this notion since I decided not to go to university). The book itself follows that concept, predominantly through its two protagonists, Will and Marcus. Will has a life most of us live at the weekends. 30-ish and unattached all but the Countdown schedule, he spends days inside cafes and hours in front of the television, and has a work/life balance of pretty much 0% work and 100% chilling out. Marcus, a 12-year-old boy who’s just moved to London with his mum, has a happiness/life balance of about 30/70.

I can’t tell you how Will and Marcus meet, because it’s one of the funniest parts of the story, and I can’t really tell you too much about the supporting characters, because a lot of them hinge around the plot too. I can tell you that the novel contains a dead duck, Kurt Cobain, Christmas songs and some hilarious one liners that made me miss being 12. (Petition to start allowing adults to say exactly what they think just as much as children.) 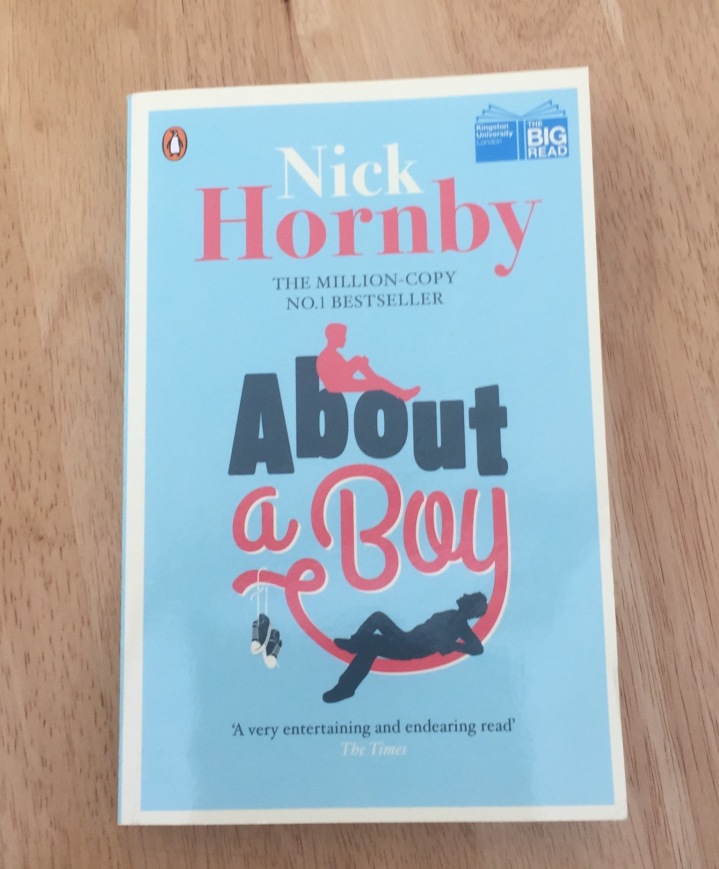 The story takes place in the 1990s, and it would be quite different if it were set today (who are the 2010s equivalent of Nirvana?!). It was nice to read something that didn’t mention Facebook, actually, but my favourite thing about the book is that the two protagonists are about as different as two people could get while having quite a lot in common, and it was the alternating of points of view that turned the book into a very gripping story. There are a lot of ironic moments, and a lot of sad moments, because Will is judging Marcus at exactly the same time as Marcus is judging Will. All the characters are quite normal people you would expect to meet out and about, so of course they are actually all bonkers and more fun to read about than most superheroes. So go read.

My previous reviews are here; you can support my work by funding me on Patreon every time I review a book here.

6 thoughts on “Review: ‘About a Boy’, Nick Hornby”