This evening I bought two sets of tarot cards. Officially it’s because I’m going to a Halloween party at the weekend. Unofficially, I feel really guilty about a small amount of book piracy in 2015.

Officially, I need tarot cards for my costume. I don’t, really, but the dress and shawl I bought in a charity shop are actually just a regular dress and shawl, so I feel like I might accidentally just look like an eccentric  if I don’t bring props. I left it way too late to buy anything fancy – and it’s a house party, not a seance – but I probably could’ve just bought a used deck off eBay or Depop. Instead, because I’ve been meaning to learn more about the tarot for ages, I trawled Etsy and Folksy and eBay and Depop looking for a deck with I genuinely like. No faux realistic graphics. Nothing with too many cats. No pictures of ethereal nymphs wearing gauze.

I found this cute major arcana deck on Etsy with incredibly sweet coffin-shaped cards, but the processing time is up to two weeks! So I bought it anyway because I wanted to support an indie artist (and because incredibly sweet coffin-shaped art, it turns out, is totally not an oxymoron). But I was still thinking, you can’t just dress as an eccentric, Francesca. You already are an eccentric, Francesca. So I trawled for decks with one-day shipping. They were all ethereal nymphs! Or quite expensive given this is a house party not a seance.

Then I remembered that in 2015, I bootlegged a copy of Maggie Stiefvater’s The Dream Thieves. If you’re new here, Maggie’s Raven Cycle series, in which The Dream Thieves features, is my favourite book series. I’m trying to be kinder to myself when considering past actions, so I am going to reflect upon my reading of a pirated copy-and-paste edition of TDT as a minor moral misstep during a time in which a fictional world brought me great comfort. Also, my library was taking forever to get its copy in.

I knew it was a shitty thing to do though. Then I bought a couple of Maggie’s books used off Amazon, that tax paying, small business supporting gem.

I’ve since atoned for my sins: I have a print from Maggie’s official store on my wall; at least three of the Maggie books on my shelf were purchased from a bricks-and-mortar shop; I’ve bought copies of her work for family; my YALC ticket that time was absolutely not scalped ; her next novel is pre-ordered at my nearest Waterstones.

But my grandmother was Catholic, so every time I see her post about book piracy and The Raven Cycle, I feel completely responsible.

So when I was considering one-day shipping and a costume prop I will realistically be too drunk to focus on, I got Maggie’s Raven Prophecy deck from Waterstones. Express shipping straight to the front door. 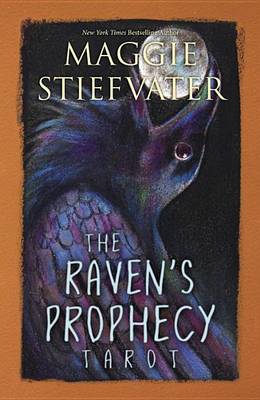 Officially, I’m a professional indie creator and a little bit into karma. I can’t ask people to buy creepy cute art from my Etsy shop if I don’t get my own coffin-shaped tarot decks on Etsy; I can’t ask people to buy my weird magic YA novel instead of moaning about why it’s not already on Amazon if I don’t buy weird magic YA novels somewhere that isn’t Amazon. Or, in this case, buy the tarot card-companion to the weird magic YA novel. And really, if we’re being spiritual, the whole reason I have a vague interest in the tarot is The Raven Cycle, so this is quite… cyclical.

I’ve just now realised I don’t have a tarot guide. I have no idea how to read the multiple decks I’m expecting in the next one-to-fourteen working days. Good thing I’ll be three sheets to the wind for most of this party, then!

Did I ever tell you guys about the time I had my tarot read in Thailand? I can’t remember if I ever wrote about it. I can’t remember much of the reading, to be honest, except that I think I was supposed to get married at 24 or 26. It was dark, though, so maybe she interpreted marriage when she should have interpreted huge professional success. Or the desire to drive on motorways. Not sure how specific these things get.

If either of these decks actually turn up by Saturday evening, I’ll post pictures of them with my costume. I’ve bought a lace scarf and gloves off Depop that was originally for an ’80s night… I’m starting to think I’m just going to look like one of the Shelbys.

Update: I did in fact look like one of the Shelbys. I’ve put multiple card/costume photos here. 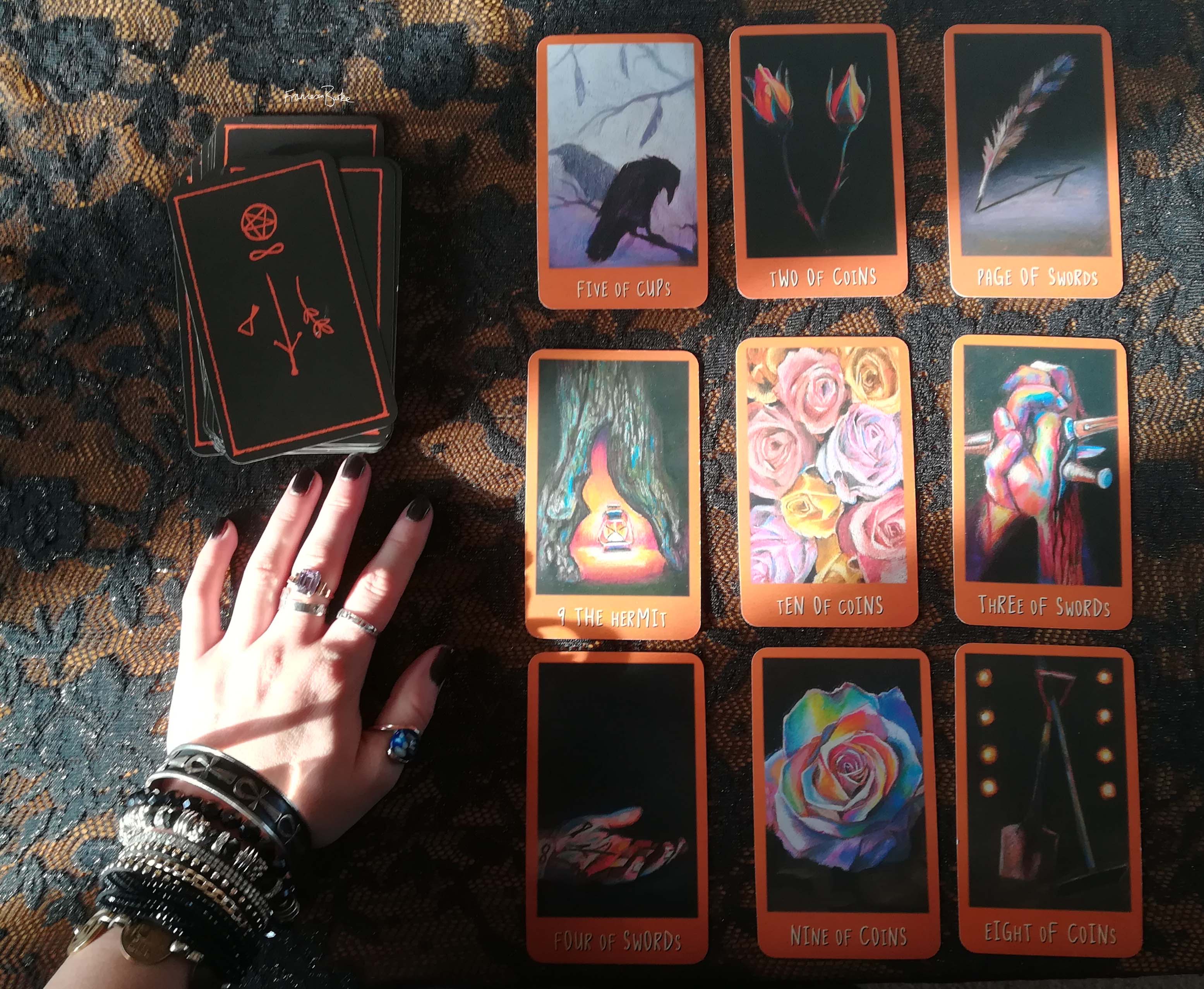 Want to support this page and/or enjoy exclusive access to stories and chatter from me? Join the No. 1 Reader’s Club on Patreon! Or we could just get coffee?

Okay, so you might have noticed I’m a Maggie Stiefvater fan. I reviewed The Raven Boys way back, I met Maggie at YALC last summer and offered her my dad’s Mustang, I irritated my brother into reading The Raven Cycle and he took The Dream Thieves to Asia with us and now it looks like this: 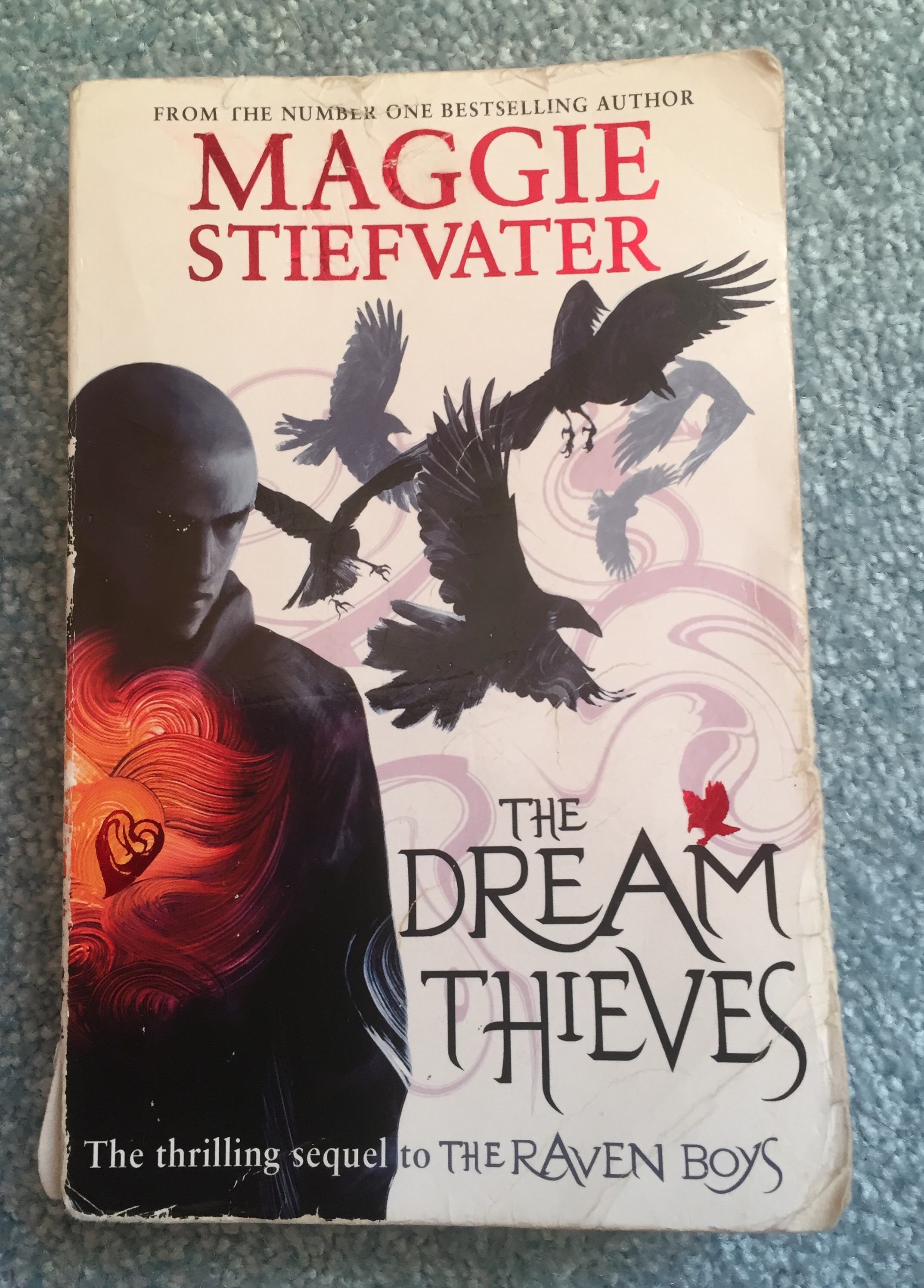 Coincidentally I’ve also been trying to practise my screenwriting, and since I cut my prose teeth on FanFiction.net (yes, you can still find me on there and no, I’m not providing a direct link) I thought I’d do the same with scripts: using a book as a template so I could stop worrying about inventing a story and focus on practising how to tell it. Since The Raven Cycle is one of those books that has found its way into my bloodstream and will never leave, I played around with ideas for a Raven Boys TV show (this was way before the actual TV series was announced). I have index cards and post it notes and tiny little Fade In documents, and it’s safe to say I will look at them again when I want to pull out my eyeballs with embarrassment – think very bad fan fictions, then think of something worse.

Onto the #BroodyBFF challenge. Last year The Raven King came out and if I love my own books half as much I’ll be pleased. I won’t give anything away but there is a scene that reminded me of a song. Or the song reminded me of a scene, I can’t remember which came first. If I were writing this in a show, I thought to myself, this is how that episode would end. Here is the song:

It would not be a spoiler to say that Bite is not really about anything to do with that scene – it’s about certain clubs with sticky floors and certain men who visit them – but I can’t not think of The Raven King when it comes up on my playlist. Which, once you’ve read the books, is either really appropriate or really inappropriate. Kind of like fan fiction is, now I think about it.

Am I looking forward to the TV show? No. I’ve only ever come across one good book-film adaptation, and that involved the book’s author, who is also a screenwriter and director, doing the screenwriting and directing. As far as I know, Maggie Stiefvater’s long list of talents does not include those things. Also, I’m not writing it. That scene will never end that way with that song. So probably one day I will either write that scene myself into my Fade In documents to satisfy my artistic hunger or I’ll put it in  piece of my own work instead. It’ll be fucking awesome.

I’m at Village Green this Saturday so Read, If You Like... will probably go up Monday. If you’re one of the #BroodyBFFs, link me your blogs! And if you’re involved with the TRB TV show, I am prepared to trade four books worth of script feedback for my firstborn child.